After handsome Korean singer and actor Taecyeon was ‘endorsed’ by an ID Clinic surgeon, fans began to question whether his good looks are 100% natural.

Recently, ID Clinic Director Kim Jun Sung fuelled Taecyeon plastic surgery rumors by remarking that his face was representative of the ideal combination of both Western and Eastern features. With his balanced facial proportions as well as a masculine, clean face line, the South Korean star was gifted with both talent and good looks from birth. However, Taecyeon 2pm plastic surgery rumors still follow the star – particularly as some gossip commentators saw Dr Kim Jun Sung’s comments as a covert indicator that he had undergone plastic surgery, perhaps even at ID.

Taecyeon is a member of the band 2PM, where he is the group’s rapper and frontrunner. He’s also an accomplished actor, having made his debut in the drama Cinderella’s Sister. The star is considered to be one of the finest young actors in South Korea’s entertainment industry and an eligible bachelor as well. In 2010, he became embroiled in a dating scandal involving Girls Generation member Yoona, although the affair was resolutely denied by the latter.

Taecyeon’s most recent acting project was in the series Wonderful Days, where he played the role of a bodyguard. He also appeared in the 148th issue of ‘High Cut’ magazine alongside fellow cover model Lee Yeon Hee, who was his co-star in the movie Marriage Blue. In 2015, there are rumors that the star plans to enlist in military service.

Taecyeon Plastic Surgery Before And After Photos

Despite the similarities in the available Taecyeon plastic surgery before and after photos, changes to his nose can still be observed. As a result, most fans believe that the star has undergone a rhinoplasty at some point in his career. In pictures taken before Taecyeon’s debut, it can be observed that his nose is marginally heavier, especially around the nostrils. In most of the Taecyeon plastic surgery before and after images, the lines of Taecyeon’s nasal bridge appear to be quite significantly different from pictures taken before his rumoured surgery.

Taecyon in high school vs. now.

Aside from the online rumors stemming from the aesthetic observations of ID’s clinical director, it is also supposed that Taecyeon – like many South Koreans – uses internet forums to research plastic surgery procedures. At one point, the search results on Google pointed to a forum profile of an individual named ‘OK Taecyeon’ , who was allegedly asking for details on plastic surgery procedures and even stated that they’d already had their nose done. This fuelled more Taecyeon plastic surgery rumours, although it is difficult to ascertain whether this was really the Korean male star or simply a fan who’d adopted his name as an online moniker.

Another area that appears quite different is Taecyeon’s mouth area. In his younger years, he had slightly more gum show when smiling and laughing. The improvements in this area are most likely the result of dental work, including gum recontoring. 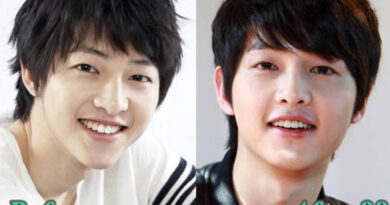